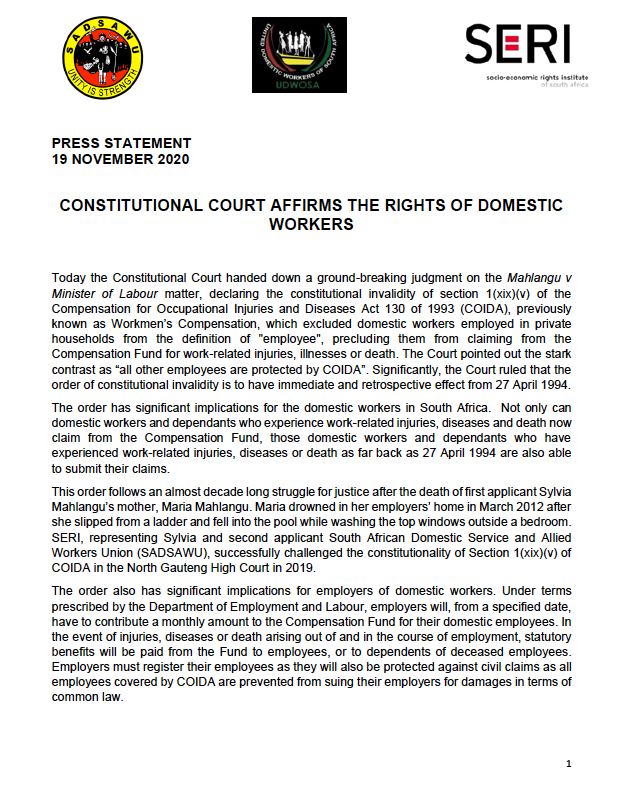 Today the Constitutional Court handed down a ground-breaking judgment on the Mahlangu v Minister of Labour matter, declaring the constitutional invalidity of section 1(xix)(v) of the Compensation for Occupational Injuries and Diseases Act 130 of 1993 (COIDA), previously known as Workmen’s Compensation, which excluded domestic workers employed in private households from the definition of "employee", precluding them from claiming from the Compensation Fund for work-related injuries, illnesses or death. The Court pointed out the stark contrast as “all other employees are protected by COIDA”. Significantly, the Court ruled that the order of constitutional invalidity is to have immediate and retrospective effect from 27 April 1994.

This order follows an almost decade long struggle for justice after the death of first applicant Sylvia Mahlangu’s mother, Maria Mahlangu. Maria drowned in her employers’ home in March 2012 after she slipped from a ladder and fell into the pool while washing the top windows outside a bedroom. SERI, representing Sylvia and second applicant South African Domestic Service and Allied Workers Union (SADSAWU), successfully challenged the constitutionality of Section 1(xix)(v) of COIDA in the North Gauteng High Court in 2019.

The order also has significant implications for employers of domestic workers. Under terms prescribed by the Department of Employment and Labour, employers will, from a specified date, have to contribute a monthly amount to the Compensation Fund for their domestic employees. In the event of injuries, diseases or death arising out of and in the course of employment, statutory benefits will be paid from the Fund to employees, or to dependents of deceased employees. Employers must register their employees as they will also be protected against civil claims as all employees covered by COIDA are prevented from suing their employers for damages in terms of common law.

Pinky Mashiane, president of United Domestic Workers of South Africa who has supported the Mahlangu case alongside other allies from the beginning, stated the following about today’s victory,

“I knew it from the start that the exclusion of domestic workers from COIDA was unconstitutional, that is why I persisted with this case and never lost hope. This is justice which has been denied domestic workers for years. It was long overdue. Now domestic workers who have been bitten by dogs, hurt themselves from falling from step ladders, and all workers who have been injured can claim for Compensation as far back as 27 April 1994. We at United Domestic Workers of South Africa are looking forward to engaging the Department of Employment and Labour about the next steps.”

It is our hope that this important judgment is a turning point in the enforcement of domestic worker laws and policies in South Africa. To further the gains made this far we encourage the Department of Employment and Labour to:

Download the judgment and read more about the case here.