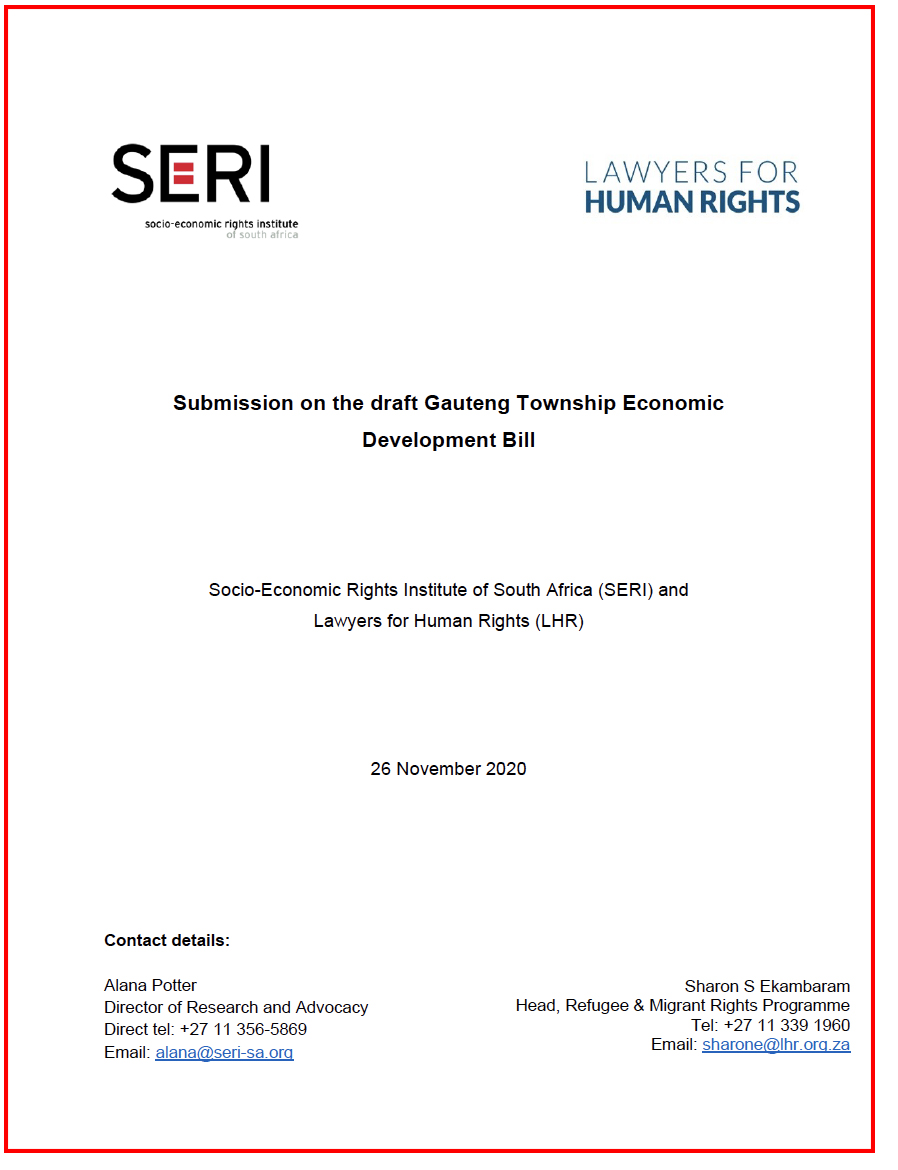 On 26 November 2020, the Socio-Economic Rights Institute (SERI) and Lawyers for Human Rights (LHR) made a submission to the Gauteng Provincial Government on its draft Township Economic Development Bill.

The submission was developed in collaboration with CSOs, urban planners and academic practitioners across the country. It comprises both a legal analysis, which includes a legal opinion from senior counsel, and an international and domestic law perspective on the draft Bill, and a detailed analysis of the latest research evidence on township economic development.

The submission draws on this research in order to recommend measures that the Gauteng Provincial Government can adopt to support the development of township economies; to promote the food economy and to promote inclusionary economic development.

The draft Township Economic Development Bill aims to promote and develop township economies by, inter alia,  designating certain areas as townships; introducing a regulatory framework and a fund, and by precluding international migrants from participating in the township economy, and by proposing fines and or imprisonment for any violations of its provisions.

The draft Bill explicitly deprives foreign nationals the freedom of self-employment, entrepreneurship or to conduct a business. It does so by reserving an undisclosed number of economic sectors in Gauteng’s townships for South African citizens and permanent residents.

The Constitution respects and protects the dignity of all who live in South Africa. Dignity is explicitly connected to the ability to make a living through employment, including self-employment. South Africa also has a well-established legal framework concerning the rights of and protections for refugees and asylum seekers which have been interpreted and expanded by the courts and supported in international law, and therefore provides entitlement to seek employment and to be afforded access to fair labour practices.

Key points in the submission:

The submission concludes that there is no rational connection between the exclusion of foreigners from a wide range of economic activities in designated townships and any legitimate government purpose, and that the draft Bill requires fundamental revision for it to give effect to its intended objectives.