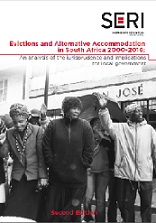 This report, which builds on a first edition published in 2013, responds to the fact that neither property owners nor municipalities have fully come to terms with the significant paradigm shift in the law relating to eviction and urban regeneration. Despite years of litigation and a host of progressive court judgments, which have substantially contributed to the constitutional right of access to adequate housing, municipalities like the City of Johannesburg are still failing to fulfill their duties in relation to evictions and the provision of alternative accommodation. The report includes the latest developments in the law relating to housing rights and evictions and aims to highlight what they have contributed towards South Africa's housing and evictions jurisprudence. The first edition was written by Michael Clark. Stuart Wilson updated the case law and analysed its implications for the second edition. >>Read the full report here.

SERI worked with the Housing Development Agency in the course of 2015 on a research project on securing tenure in informal settlements on customary land. It involved in-depth research in four informal settlements in four provinces and culminated in a set of recommendations for the HDA and other role players. One of the key issues identified in the research was lack of awareness about IPILRA rights (the Interim Protection of Informal Land Rights Act) among the key stakeholders. >>Read the full report here.

This report provides a portrait of informal trade in the inner city of Johannesburg. In 2013, informal traders were evicted on a mass scale from the city’s streets as part of Operation Clean Sweep. The City of Johannesburg explained the operation as an effort to rid the inner city of crime and grime. During the eviction of traders, and the subsequent refusal to allow them to resume their trade, the City failed to follow the consultative processes required by the Businesses Act. The operation was later lambasted in a Constitutional Court judgment as an act of “humiliation and degradation”. This report investigates the regulation of informal trade in the inner city, as well as traders’ daily experiences of making a living there, in order to explore the impact of the prohibition and restriction of trade being pursued by the City. It argues that the regulation of informal trade is restrictive, non-consultative, orientated towards enforcement rather than development, and that it is instrumental in producing illegality. Further, by foregrounding the experiences of traders, it exposes major gaps in informal trading policy in the city and in the way in which informality has been imagined more broadly. The report argues that the challenges of informal trade can be addressed if the City improves the way in which it is regulated. There are, however, also deeper problems with the ways in which informality is imagined and approached by the City, and the state more generally. The report shows that an investigation into how prohibition or relocation may effect traders, as set out in the Businesses Act, is both possible and necessary. The report was written by Dennis Webster. >>Read the full report here and the summary here.

This research report examines the week-long protest in Thembelihle, near Lenasia, Johannesburg which took place in September 2011. Frustrated by an unaccountable and unresponsive local government that frequently disregarded the community’s on-going demands for access to adequate basic services, Thembelihle residents took to the streets. Their demands, however, were dismissed by local and provincial government and met with a forceful police clamp-down. In the aftermath of the protest, arrest and criminal prosecution (often on frivolous charges) was used to harass and intimidate community members and to target community leaders, marking an alarming trend in which the criminal justice system is used by the government to suppress popular dissent. This highlights the growing trend of state repression of popular protests in poor urban areas and details how the state employs the criminal justice system to vilify, criminalise and suppress local communities advocating  for socio-economic development. This report was written by Michael Clark. >>Read the full report (including an executive summary) here.

This research report highlights the gap in the demand for and supply of low-income rental accommodation in inner city Johannesburg. From research into the supply of formal rental accommodation in the inner city, it is clear that there are no permanent options available to those earning below R3 200 per month. This comprises almost 50% of all households in the inner city, who can afford rent of R900 or less per month. While there are a few institutions providing state-subsidised social housing at lower rentals, these institutions are extremely oversubscribed and there is almost no social housing actually available or affordable to people. The City argues that poor and low-income people should access informal accommodation in shared units at cheaper rentals. However even this informal accommodation is unaffordable to many people, with living arrangements overcrowded with a lack of privacy and security of tenure. The report argues that the most significant intervention the City should be making in the inner city is an affordable, accessible rental housing programme that responds to the needs of the majority of residents. This report was written by Kate Tissington. >>Read the full report here and the summary here.

The jurisprudence of the South African courts (especially the Constitutional Court and the Supreme Court of Appeal) has significantly contributed to the right of access to adequate housing, enshrined in section 26 of the Constitution. The courts have supplemented the legal framework by developing a number of progressive legal principles that should be upheld in eviction cases. The jurisprudence has therefore led to the development of a new cluster of relationships between the parties involved in eviction proceedings, a cluster of relationships that is characterised by a series of rights and obligations pertaining to various parties. Yet despite years of litigation and a host of progressive judgments municipalities have been hesitant, unwilling or unable to act on the obligations laid down in case law. It is amid this complexity that this report seeks to provide a comprehensive analysis of the jurisprudence on evictions and alternative accommodation, and the contingent obligations on municipalities in respect of the provision of alternative accommodation. It is hoped that the report might act as a to guide activists, communities and public interest law practitioners caught up in eviction related struggles, as well as local government officials who are tasked with devising and implementing housing policy. This report was written by Michael Clark. >>Read the report here and the summary here.

This research report provides an overview of the law and policies relevant to free basic services (FBS) and municipal indigent policies in South Africa. It details the regulations and strategies around FBS - free basic water (FBW), free basic electricity (FBE), free basic sanitation (FBSan) and free basic refuse removal (BRR) - and examines the framework policy and implementation guidelines for municipal indigent policies. The report also contains a survey of 137 municipal indigent policies in South Africa that highlights the numerous problems encountered with the implementation of indigent policies and the provision of FBS, including: targeting methods of FBS, municipal systems of indigent application, conditionalities attached to indigent status and FBS, and FBS amount provided. The report finds that indigent policies tend to restrict FBS to people who already own property, when the greatest need exists among those who do not. The application and documentation requirements to access indigency support are excessive, and the system is designed to restrict rather than expand access to FBS. While the professed aim of the indigent framework is to “target” the poor for the provision of basic services, its overall effect is to target them for exclusion. This report was written by Kate Tissington. >>Read the report here and the summary here.

This research report by the Community Law Centre and SERI analyses perceptions and practice around housing demand and allocation in South Africa, looking at the policies and processes operating at national, provincial and local level. Politicians and officials responsible for housing policy, at all levels of the state, have sought to create the impression that housing allocation is a rational process, which prioritises those in the greatest need, and those who have been waiting for a subsidised house the longest. The ideologically (and emotionally) charged concepts of ‘the waiting list’ and ‘the housing queue’ are emblematic of this. However, the situation is far more complicated. This report attempts to unpack some of the complexity and provide recommendations to government departments at all levels. It argues that the housing waiting list is a myth and should be eradicated from public discourse on housing in favour of a more nuanced way of characterising the rational, appropriate and humane responses to the broad range of housing needs in South Africa, which are not currently catered for by the market. >>Read the main report here and the executive summary here.

n 24 August 2012, 46 applicants who collectively refer to themselves as the “Forgotten Poor Black Citizens of South Africa” approached the Constitutional Court to make an application for direct access to the Court. The applicants sought an order from the Court setting aside a number of court orders from lower courts. The applicants declined the suggestion to obtain legal representation and, in order to further its understanding of the matter, the Court requested SERI and the Legal Resources Centre (LRC) to conduct an initial investigation into the application and to compile a report of the findings. SERI and the LRC found that at the core, the majority of the matters the applicants seek to bring under appeal point very strongly to potentially far-reaching systemic failures in the process of evictions and executions concerning residential property.

This research report examines the impact of attempts to formalise street trading in eThekwini Metropolitan Municipality since 2000 on the livelihood of traders, particularly female and migrant traders. Durban has been at the forefront of developing policies to manage and control informal economy activities; however, as the report notes, the effect of the push for formalisation is exclusionary and mimics the influx control regimes of the apartheid administration, which prevented black communities from pursuing business opportunities in central business districts. Such regulation has a particularly adverse effect on migrants and poor women, since they struggle to meet the requirements for registration, permits and rentals. The report provides some recommendations for policy-makers, city officials and traders. This report was written by Blessing Karumbidza.