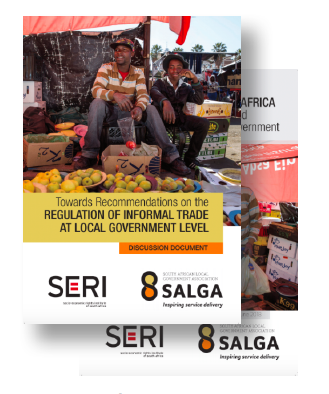 The first publication, Informal Trade in South Africa: Legislation, Case Law and Recommendations for Local Government (June 2018), responds to the fact that municipalities have struggled to fully come to terms with the law relating to informal trade. The report unpacks court judgments which have substantially contributed to the rights of informal traders and identifies a range of legal principles governing the rights, duties and obligations of informal traders, law enforcement officers and local government. The report dispels a number of longstanding myths associated with informal trade, including the belief that the law does not grant protection to foreign nationals who participate in informal trade, that informal traders often act illegally or unlawfully while trading, and that the only regulatory mechanisms available to local government are the impoundment of traders’ goods and the eviction or relocation of traders.

The second publication, Towards Recommendations on the Regulation of Informal Trade at Local Government Level (June 2018), provides a set of recommendations to local government on how informal trade can be regulated in a manner that respects the rights of informal traders, and is just, humane and inclusive.

In 2017, over 1.1 million South Africans worked as informal traders. Informal trade makes up a significant component of the economy and has an important role to play in addressing some of South Africa’s most pervasive development challenges, including high levels of unemployment and poverty. These research papers seek to assist local government in understanding their legal and constitutional obligations toward informal traders. With knowledge of the law, local government can alter their approach to informal trade by supporting and nurturing this essential sector while also boosting economic growth.