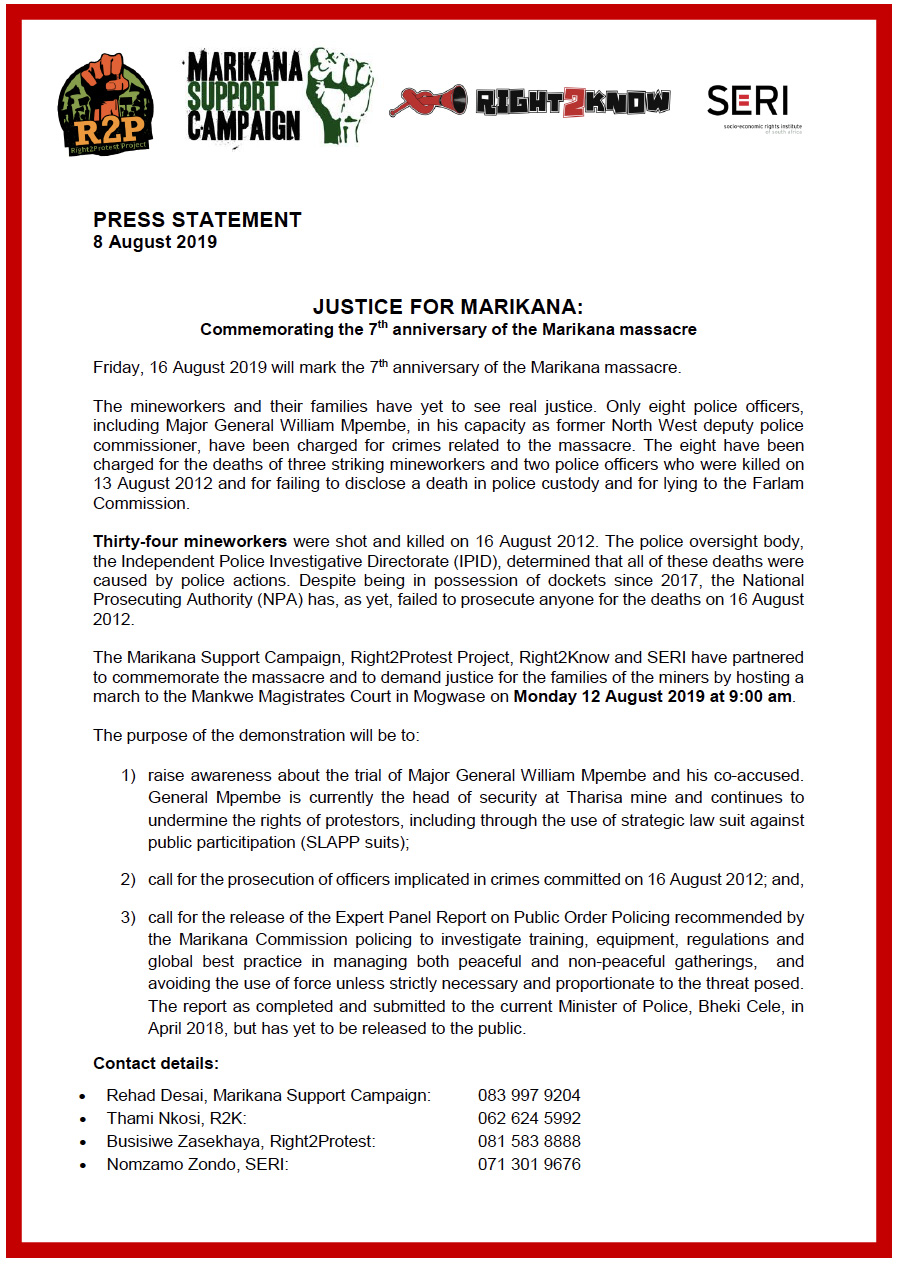 Commemorating the 7th anniversary of the Marikana massacre

Friday, 16 August 2019 will mark the 7th anniversary of the Marikana massacre.

The mineworkers and their families have yet to see real justice. Only eight police officers, including Major General William Mpembe, in his capacity as former North West deputy police commissioner, have been charged for crimes related to the massacre. The eight have been charged for the deaths of three striking mineworkers and two police officers who were killed on 13 August 2012 and for failing to disclose a death in police custody and for lying to the Farlam Commission.

Thirty-four mineworkers were shot and killed on 16 August 2012. The police oversight body, the Independent Police Investigative Directorate (IPID), determined that all of these deaths were caused by police actions. Despite being in possession of dockets since 2017, the National Prosecuting Authority (NPA) has, as yet, failed to prosecute anyone for the deaths on 16 August 2012.

The Marikana Support Campaign, Right2Protest Project, Right2Know and SERI have partnered to commemorate the massacre and to demand justice for the families of the miners by hosting a march to the Mankwe Magistrates Court in Mogwase on Monday 12 August 2019 at 9:00 am.

The purpose of the demonstration will be to:

1)raise awareness about the trial of Major General William Mpembe and his co-accused.General Mpembe is currently the head of security at Tharisa mine and continues toundermine the rights of protestors, including through the use of strategic law suit againstpublic particitipation (SLAPP suits);

2)call for the prosecution of officers implicated in crimes committed on 16 August 2012; and,

3)call for the release of the Expert Panel Report on Public Order Policing recommended bythe Marikana Commission policing to investigate training, equipment, regulations andglobal best practice in managing both peaceful and non-peaceful gatherings, andavoiding the use of force unless strictly necessary and proportionate to the threat posed.The report as completed and submitted to the current Minister of Police, Bheki Cele, inApril 2018, but has yet to be released to the public.