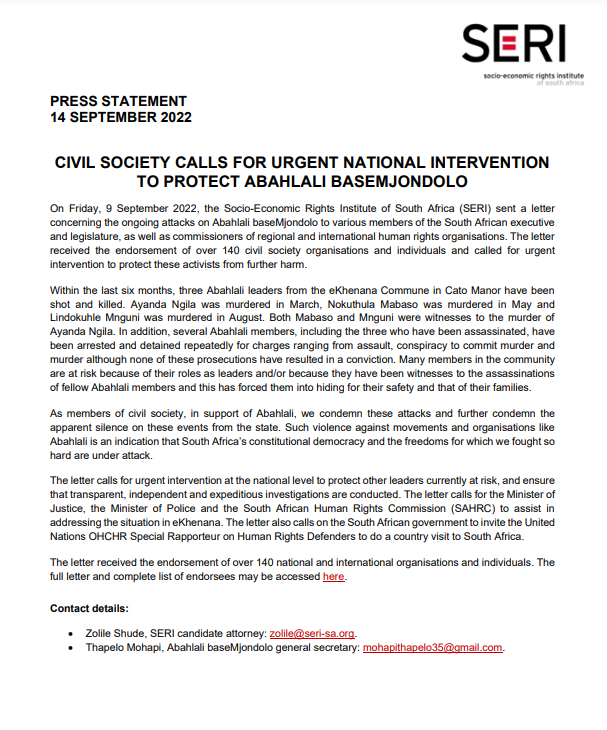 On Friday, 9 September 2022, the Socio-Economic Rights Institute of South Africa (SERI) sent a letter concerning the ongoing attacks on Abahlali baseMjondolo to various members of the South African executive and legislature, as well as commissioners of regional and international human rights organisations. The letter received the endorsement of over 140 civil society organisations and individuals and called for urgent intervention to protect these activists from further harm.

Within the last six months, three Abahlali leaders from the eKhenana Commune in Cato Manor have been shot and killed. Ayanda Ngila was murdered in March, Nokuthula Mabaso was murdered in May and Lindokuhle Mnguni was murdered in August. Both Mabaso and Mnguni were witnesses to the murder of Ayanda Ngila. In addition, several Abahlali members, including the three who have been assassinated, have been arrested and detained repeatedly for charges ranging from assault, conspiracy to commit murder and murder although none of these prosecutions have resulted in a conviction. Many members in the community are at risk because of their roles as leaders and/or because they have been witnesses to the assassinations of fellow Abahlali members and this has forced them into hiding for their safety and that of their families.

As members of civil society, in support of Abahlali, we condemn these attacks and further condemn the apparent silence on these events from the state. Such violence against movements and organisations like Abahlali is an indication that South Africa’s constitutional democracy and the freedoms for which we fought so hard are under attack.

The letter calls for urgent intervention at the national level to protect other leaders currently at risk, and ensure that transparent, independent and expeditious investigations are conducted. The letter calls for the Minister of Justice, the Minister of Police and the South African Human Rights Commission (SAHRC) to assist in addressing the situation in eKhenana. The letter also calls on the South African government to invite the United Nations OHCHR Special Rapporteur on Human Rights Defenders to do a country visit to South Africa.