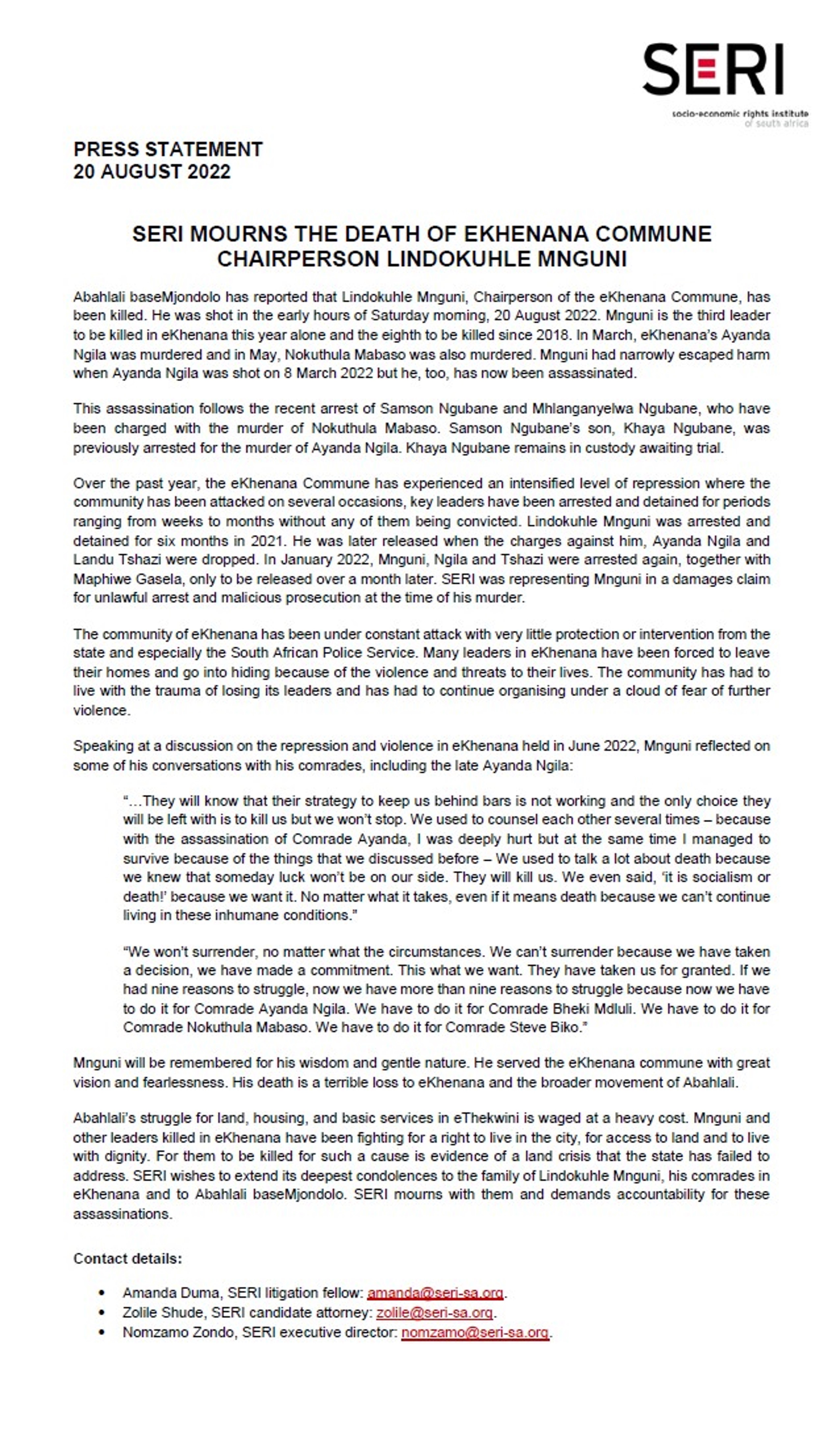 Abahlali baseMjondolo has reported that Lindokuhle Mnguni, Chairperson of the eKhenana Commune, has been killed. He was shot in the early hours of Saturday morning, 20 August 2022. Mnguni is the third leader to be killed in eKhenana this year alone and the eighth to be killed since 2018. In March, eKhenana’s Ayanda Ngila was murdered and in May, Nokuthula Mabaso was also murdered. Mnguni had narrowly escaped harm when Ayanda Ngila was shot on 8 March 2022 but he, too, has now been assassinated.

Over the past year, the eKhenana Commune has experienced an intensified level of repression where the community has been attacked on several occasions, key leaders have been arrested and detained for periods ranging from weeks to months without any of them being convicted. Lindokuhle Mnguni was arrested and detained for six months in 2021. He was later released when the charges against him, Ayanda Ngila and Landu Tshazi were dropped. In January 2022, Mnguni, Ngila and Tshazi were arrested again, together with Maphiwe Gasela, only to be released over a month later. SERI was representing Mnguni in a damages claim for unlawful arrest and malicious prosecution at the time of his murder.

The community of eKhenana has been under constant attack with very little protection or intervention from the state and especially the South African Police Service. Many leaders in eKhenana have been forced to leave their homes and go into hiding because of the violence and threats to their lives. The community has had to live with the trauma of losing its leaders and has had to continue organising under a cloud of fear of further violence.

Speaking at a discussion on the repression and violence in eKhenana held in June 2022, Mnguni reflected on some of his conversations with his comrades, including the late Ayanda Ngila:

“…They will know that their strategy to keep us behind bars is not working and the only choice they will be left with is to kill us but we won’t stop. We used to counsel each other several times – because, with the assassination of Comrade Ayanda, I was deeply hurt but at the same time I managed to survive because of the things that we discussed before – We used to talk a lot about death because we knew that someday luck won’t be on our side. They will kill us. We even said, ‘it is socialism or death!’ because we want it. No matter what it takes, even if it means death because we can’t continue living in these inhumane conditions.”

Mnguni will be remembered for his wisdom and gentle nature. He served the eKhenana commune with great vision and fearlessness. His death is a terrible loss to eKhenana and the broader movement of Abahlali.

Abahlali’s struggle for land, housing, and basic services in eThekwini is waged at a heavy cost. Mnguni and other leaders killed in eKhenana have been fighting for a right to live in the city, for access to land and to live with dignity. For them to be killed for such a cause is evidence of a land crisis that the state has failed to address. SERI wishes to extend its deepest condolences to the family of Lindokuhle Mnguni, his comrades in eKhenana and to Abahlali baseMjondolo. SERI mourns with them and demands accountability for these assassinations.