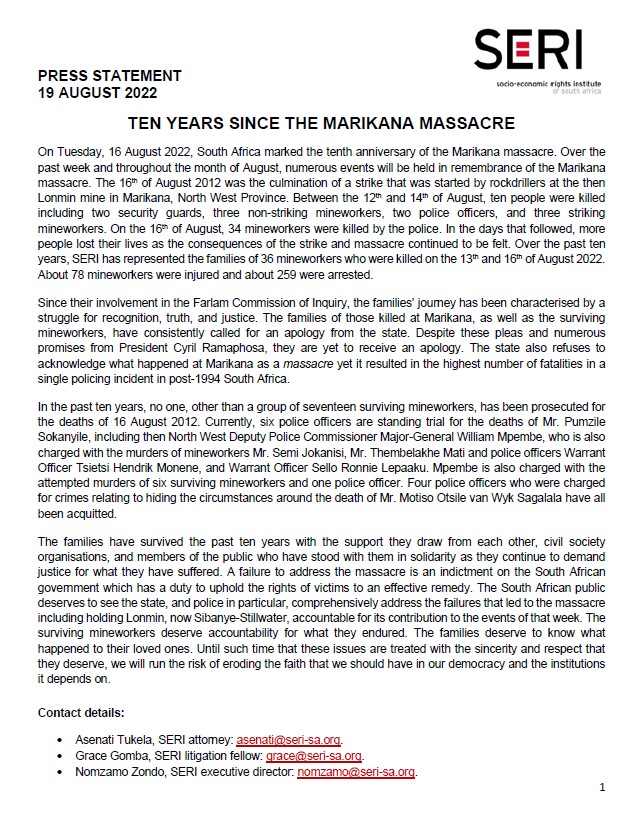 On Tuesday, 16 August 2022, South Africa marked the tenth anniversary of the Marikana massacre. Over the past week and throughout the month of August, numerous events will be held in remembrance of the Marikana massacre. The 16th of August 2012 was the culmination of a strike that was started by rockdrillers at the then Lonmin mine in Marikana, North West Province. Between the 12th and 14th of August, ten people were killed including two security guards, three non-striking mineworkers, two police officers, and three striking mineworkers. On the 16th of August, 34 mineworkers were killed by the police. In the days that followed, more people lost their lives as the consequences of the strike and massacre continued to be felt. Over the past ten years, SERI has represented the families of 36 mineworkers who were killed on the 13th and 16th of August 2022. About 78 mineworkers were injured and about 259 were arrested.

Since their involvement in the Farlam Commission of Inquiry, the families’ journey has been characterised by a struggle for recognition, truth, and justice. The families of those killed at Marikana, as well as the surviving mineworkers, have consistently called for an apology from the state. Despite these pleas and numerous promises from President Cyril Ramaphosa, they are yet to receive an apology. The state also refuses to acknowledge what happened at Marikana as a massacre yet it resulted in the highest number of fatalities in a single policing incident in post-1994 South Africa.

In the past ten years, no one, other than a group of seventeen surviving mineworkers, has been prosecuted for the deaths of 16 August 2012. Currently, six police officers are standing trial for the deaths of Mr. Pumzile Sokanyile, including then North West Deputy Police Commissioner Major-General William Mpembe, who is also charged with the murders of mineworkers Mr. Semi Jokanisi, Mr. Thembelakhe Mati and police officers Warrant Officer Tsietsi Hendrik Monene, and Warrant Officer Sello Ronnie Lepaaku. Mpembe is also charged with the attempted murders of six surviving mineworkers and one police officer. Four police officers who were charged for crimes relating to hiding the circumstances around the death of Mr. Motiso Otsile van Wyk Sagalala have all been acquitted.

The families have survived the past ten years with the support they draw from each other, civil society organisations, and members of the public who have stood with them in solidarity as they continue to demand justice for what they have suffered. A failure to address the massacre is an indictment on the South African government which has a duty to uphold the rights of victims to an effective remedy. The South African public deserves to see the state, and police in particular, comprehensively address the failures that led to the massacre including holding Lonmin, now Sibanye-Stillwater, accountable for its contribution to the events of that week. The surviving mineworkers deserve accountability for what they endured. The families deserve to know what happened to their loved ones. Until such time that these issues are treated with the sincerity and respect that they deserve, we will run the risk of eroding the faith that we should have in our democracy and the institutions it depends on.