[PRESS CONFERENCE] The City of Johannesburg's incitement of violence against SERI and its staff (1 August 2022). 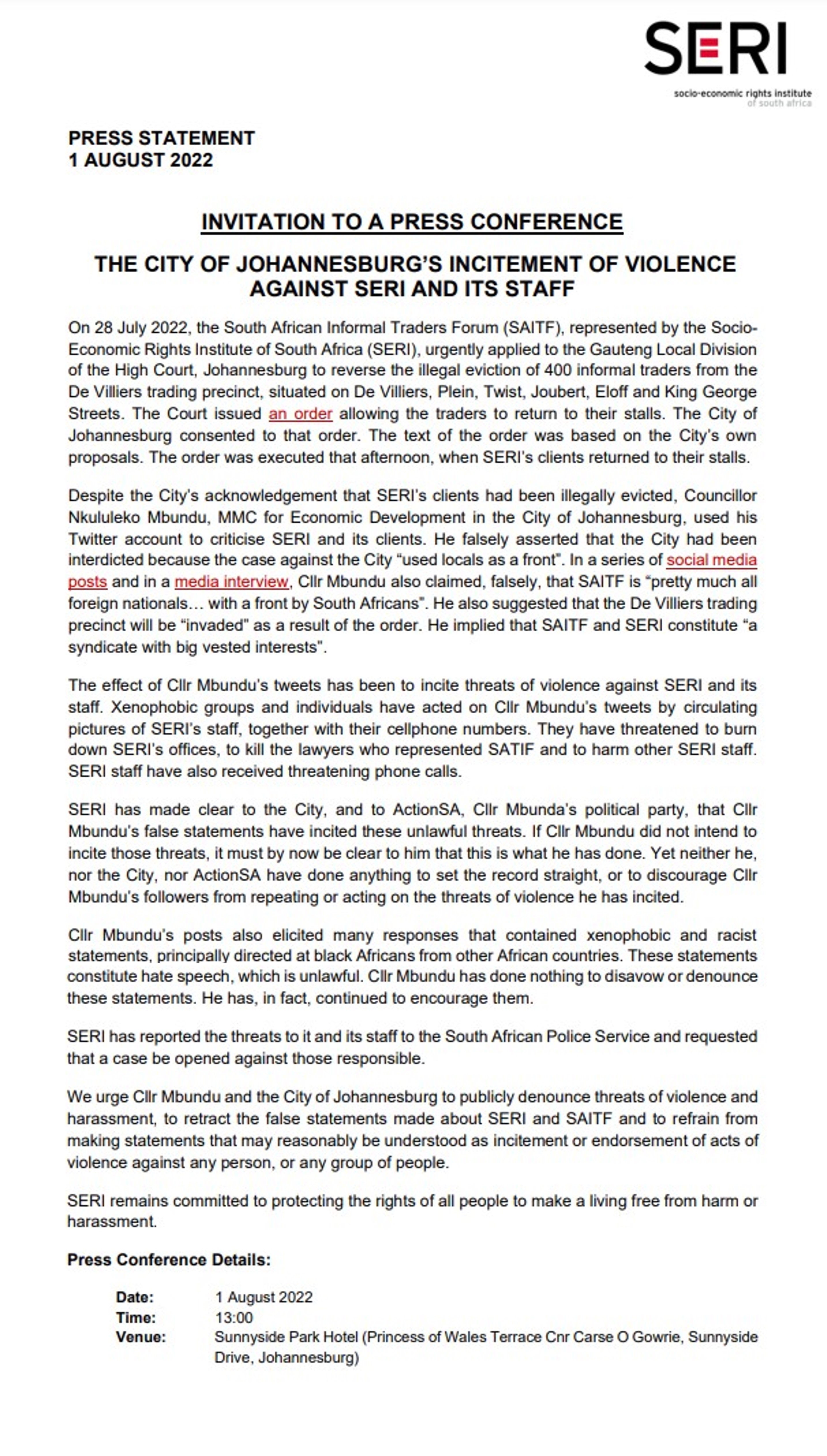 On 28 July 2022, the South African Informal Traders Forum (SAITF), represented by the Socio-Economic Rights Institute of South Africa (SERI), urgently applied to the Gauteng Local Division of the High Court, Johannesburg to reverse the illegal eviction of 400 informal traders from the De Villiers trading precinct, situated on De Villiers, Plein, Twist, Joubert, Eloff and King George Streets. The Court issued an order allowing the traders to return to their stalls. The City of Johannesburg consented to that order. The text of the order was based on the City’s own proposals. The order was executed that afternoon, when SERI’s clients returned to their stalls.

Despite the City’s acknowledgement that SERI’s clients had been illegally evicted, Councillor Nkululeko Mbundu, MMC for Economic Development in the City of Johannesburg, used his Twitter account to criticise SERI and its clients. He falsely asserted that the City had been interdicted because the case against the City “used locals as a front”. In a series of social media posts and in a media interview, Cllr Mbundu also claimed, falsely, that SAITF is “pretty much all foreign nationals… with a front by South Africans”. He also suggested that the De Villiers trading precinct will be “invaded” as a result of the order. He implied that SAITF and SERI constitute “a syndicate with big vested interests”.

The effect of Cllr Mbundu’s tweets has been to incite threats of violence against SERI and its staff. Xenophobic groups and individuals have acted on Cllr Mbundu’s tweets by circulating pictures of SERI’s staff, together with their cellphone numbers. They have threatened to burn down SERI’s offices, to kill the lawyers who represented SATIF and to harm other SERI staff. SERI staff have also received threatening phone calls.

SERI has made clear to the City, and to ActionSA, Cllr Mbunda’s political party, that Cllr Mbundu’s false statements have incited these unlawful threats. If Cllr Mbundu did not intend to incite those threats, it must by now be clear to him that this is what he has done. Yet neither he, nor the City, nor ActionSA have done anything to set the record straight, or to discourage Cllr Mbundu’s followers from repeating or acting on the threats of violence he has incited.

Cllr Mbundu’s posts also elicited many responses that contained xenophobic and racist statements, principally directed at black Africans from other African countries. These statements constitute hate speech, which is unlawful. Cllr Mbundu has done nothing to disavow or denounce these statements. He has, in fact, continued to encourage them.

SERI has reported the threats to it and its staff to the South African Police Service and requested that a case be opened against those responsible.

We urge Cllr Mbundu and the City of Johannesburg to publicly denounce threats of violence and harassment, to retract the false statements made about SERI and SAITF and to refrain from making statements that may reasonably be understood as incitement or endorsement of acts of violence against any person, or any group of people.

SERI remains committed to protecting the rights of all people to make a living free from harm or harassment.