[ADVOCACY] Advocating for the rights of domestic workers during lockdown (31 July 2020).

Over the last two years SERI’s work in the Making a Living theme has expanded to include advocating for the rights of domestic workers. Beginning with the Domestic Workers’ Rights Guide in 2018 and throughout our involvement in Mahlangu v Minister of Labour, SERI has engaged in advocacy in this sector, including rights education workshops and engagements with government officials and civil society organisations.

The COVID-19 crisis and national lockdown has had a devastating impact on South Africa’s 1 million domestic workers. Since the implementation of the lockdown, many domestic workers have been put on unpaid leave or dismissed unfairly by their employers. A survey conducted by Izwi Domestic Workers Alliance found that only 38% of 600 respondents were paid full wages in the first month of the lockdown. That number dropped further in May, June and July. While very few employers continue to pay their domestic workers’ wages during the lockdown, the vast majority of domestic employers have failed to communicate a course of action to ensure that their employees’ livelihoods are protected, leaving domestic workers, who already lived hand to mouth, anxious about how they would support themselves and their families during this period.

Their vulnerability was further compounded by the closure of labour centres and CCMA offices during the first few weeks of the lockdown, and the Department of Employment and Labour’s request that workers access these services online. This meant that domestic workers who had been unfairly dismissed or had other grievances, had to use what little money they had to purchase data to use the internet, or wait until the offices were reopened to seek recourse. Labour centres reopened on 1 June, however, due to the lockdown, workers with unresolved grievances and queries are visiting the offices in large numbers, making it difficult to practice physical distancing. 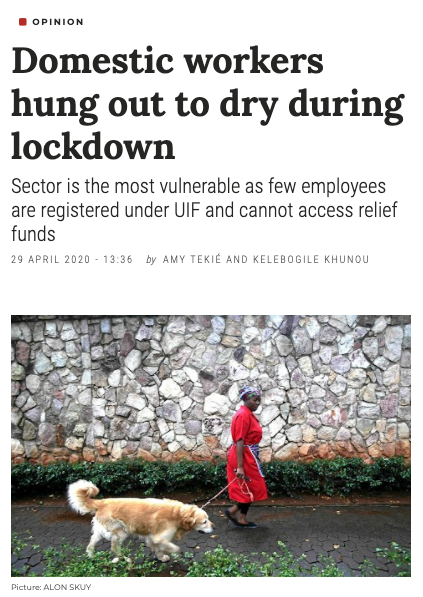 At the beginning of the lockdown in all communications relating to employment and labour, the government neglected to directly address the domestic work sector, leaving this vulnerable sector without a clear direction for several weeks. When the Department of Employment and Labour initially introduced TERS, the benefit was only available to employers who were registered with the Unemployment Insurance Fund (UIF) and made monthly contributions as required by the Unemployment Insurance Contributions Act 4 of 2002 (Contributions Act). This meant that workers whose employers neglected to register them for the UIF even though they were eligible to be registered, were excluded from benefiting from TERS, despite the fact that section 10 of the Contributions Act states that the obligation to register with the UIF lies with an employer.

Women in Informal Employment: Globalizing and Organizing (WIEGO) and the University of Western Cape’s Social Law Project estimate that only 20% of domestic workers are registered for UIF. This means that hundreds of thousands of domestic workers were potentially excluded.  To bring awareness to this issue SERI’s Kelebogile Khunou and Izwi Domestic Workers Alliance’s Amy Tekié wrote an op-ed calling for the inclusion of unregistered domestic workers in TERS. 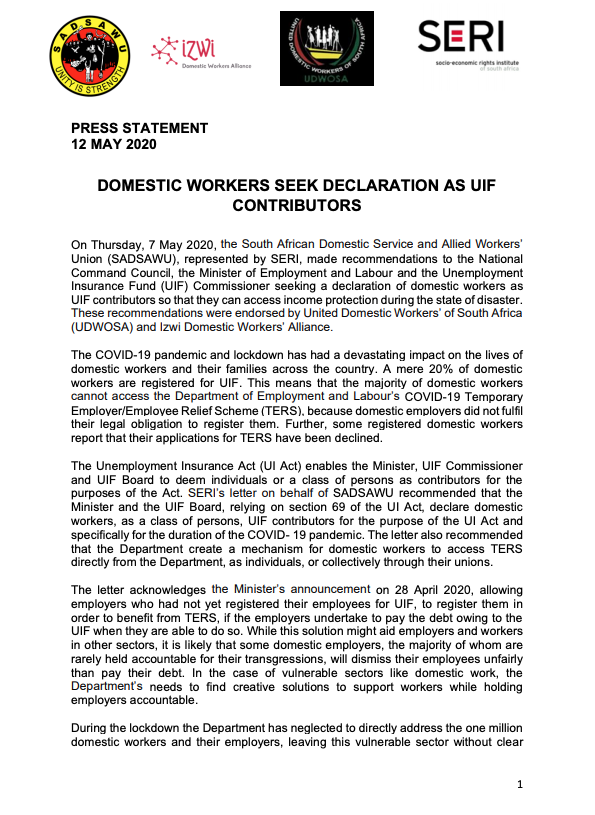 SERI took further steps to fight for unregistered domestic workers’ access to TERS. On 7 May, the South African Domestic Service and Allied Workers’ Union (SADSAWU), represented by SERI, made recommendations to the National Command Council, the Minister of Employment and Labour and the Unemployment Insurance Fund (UIF) Commissioner seeking a declaration of domestic workers, as a class of persons, UIF contributors.

The Unemployment Insurance Act (UI Act) enables the Minister, UIF Commissioner and UIF Board to deem individuals or a class of persons as contributors for the purposes of the Act. Our letter recommended that the Minister and the UIF Board, relying on section 69 of the UI Act, declare domestic workers, as a class of persons, UIF contributors for the purpose of the UI Act and specifically for the duration of the COVID- 19 pandemic thus granting domestic workers whose employers failed to register them access to TERS.  The letter also recommended that the Department create a mechanism for domestic workers to access TERS directly from the Department, as individuals, or collectively through their unions. These recommendations were endorsed by United Domestic Workers’ of South Africa (UDWOSA) and Izwi Domestic Workers’ Alliance.

In response the Minister of Employment and Labour stated that since domestic workers have been included in the UI Act since 2003, it was not necessary to deem them contributors. This response was a misunderstanding of our request which sought to ensure that workers whose employers failed to register them even though they were eligible to be registered, were not penalised for their employers’ actions. The Minister however informed SERI that the directive was due to be amended to include applications by individual employees where the employer fails or refuses to apply on their behalf.

Due to pressure from civil society organisations over the lockdown period the Department made two significant amendments to the TERS directive: as was promised in the Minister’s response, in late May the directive was amended to allow individual employees to apply for themselves if their employer failed or refused to do so and; the Department extended TERS to non-registered workers who had previously been excluded from the scheme because their employers had unlawfully failed to register them. This was victory for South Africa’s domestic workers, albeit a short-term one.

Many domestic workers are reporting that they have been unable to access TERS, even with the two amendments to the TERS directive because of the lack of clear information about the channels to be used workers, registered and unregistered, to apply for the scheme individually, leaving many workers without an income for up to four months. This is an issue several organisations are working to resolve.

From 1 June 2020 the level 3 regulations permitted domestic workers to return to work, which has been met with a sense of relief for many workers who were without an income for months, but also presents them with a significant concern: contracting COVID-19 at their places of work.

On 23 March 2020, the Compensation Commissioner published a notice in terms of section 6A of the Compensation for Occupational Injuries and Diseases Act 130 of 1993 (COIDA), stating that an employee contracting the coronavirus in the course of their employment is entitled to claim compensation, thus establishing COVID-19 as an occupational disease under COIDA.  Domestic workers are however still excluded from the ambit of COIDA, pending the outcome Mahlangu v Minister of Labour court case, which is awaiting judgment from the Constitutional Court. Impatient and desperate, domestic workers are now campaigning for the COIDA Amendment Bill to be passed through parliament. Myrtle Witbooi, General Secretary of SADSAWU stated,

“The inclusion of domestic workers in COIDA is long overdue, SADSAWU is now campaigning for the COIDA Bill to be signed by the President”

The COVID-19 pandemic and the lockdown in South Africa has put a spotlight on just how devastating the effects of the lack of enforcement of labour legislation in the domestic work sector are.